Painting a Mural for the People of Itaparica, Bahía, Brasil
07 March 11
One week after DepartureBarely ten days into my two-month artist residency at the Sacatar Foundation in Bahia, Brasil, the islanders of Itaparica bestowed a great honor: an invitation to paint a mural for their neighborhood church, Santo Antonio dos Navegantes. I had strolled uphill that morning to observe their annual Lavagem, a ritual cleansing of the church, and soon found myself helping remove pews, sweep and mop the floor, string colorful ribbons on decorative brooms, and coax cobwebs from the fifteen-foot ceiling. 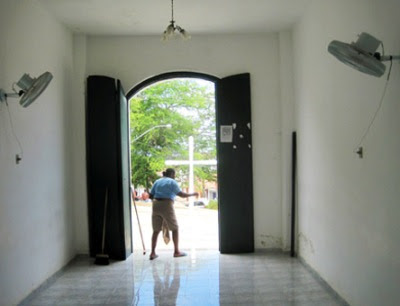 When the hours-long procession through town ensued, I was swept into its enthusiasm and welcomed with glowing smiles, embraces, and shared draughts of beer. 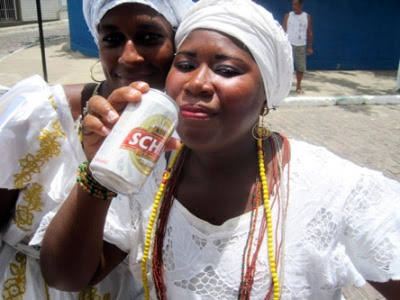 The baianas having beer during the “Lavagem”, Bahia © 2011, J Michael Walker

The following weekend’s procession to and along the waterfront, with Santo Antonio’s statue on a carved wooden ship, only deepened my bond with and appreciation for the community; and when the mural conversation turned serious, I replied that, Of course, I’d be happy – and honored – to paint one, if the proper materials could be obtained. 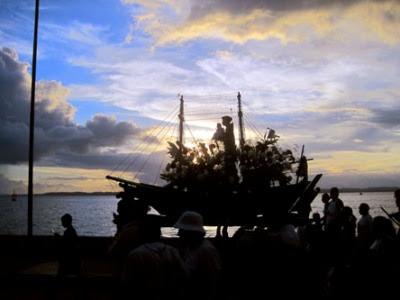 I left those details to Augusto, Sacatar’s chief administrator and a community resident, to resolve, and to Santo Antonio and Exú to facilitate, and went back to translating my rich Itaparica experiences nto drawings.

The paints were finally shipped from Sao Paulo, and ferried across the bay to our island just over a week before I was to leave; but we all knew things would work out – even if, given the intense morning sun beating down on the wall, I could only paint afternoons and evenings. 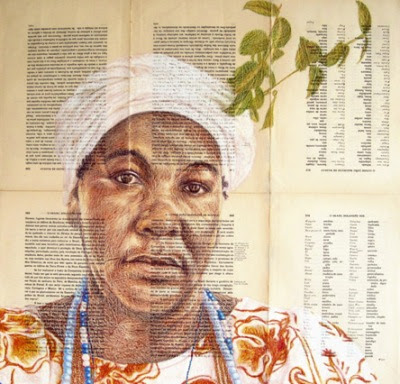 One of J Michael’s drawings of the baianas © 2011, J Michael Walker

Inspired by the blue and white Portuguese tile murals that embellish Colonial-era churches across the bay in Salvador, I chose to work in a blue monochrome, which saved us precious time and scant money – and had the added effect of echoing the gorgeous skies over Itaparica. 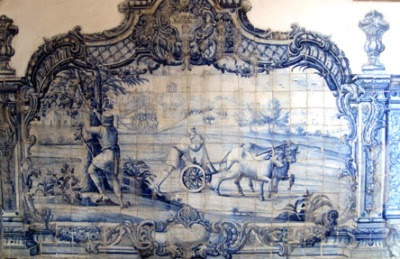 The inspiration for the mural of Santo Antônio dos Navegantes © 2011, J Michael Walker

Raimundo, Sacatar’s maintenance man (and one of the coolest guys on the planet), and Patricio, his assistant, prepped the tile wall and applied the base coat. 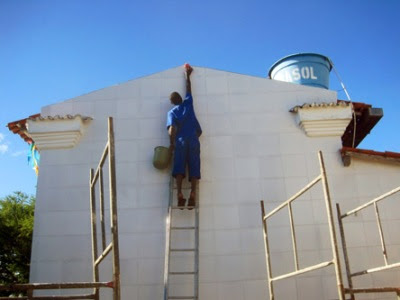 Pulling together my photos of island flora and boatmen, centering it on my version of the saint’s traditional image, and wrapping the mural in a slightly-readjusted “All the Saints” template, I completed the design, and after an early dinner (Muito obrigado, Marcia) I carried my laptop, my drawing, and the library’s loaned projector (Muito obrigado, Tina e Dalva) to Santo Antonio’s hilltop church and angled to find the best spot to project the design, as a crowd assembled in the neighborhood night. 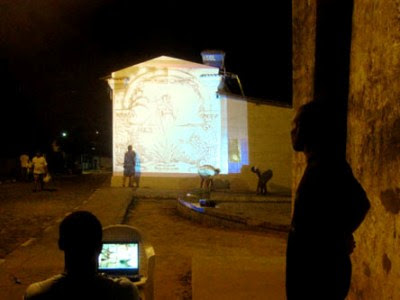 After considerable discussion and suggestions (Muito obrigado, todo mundo), the proper projector location was set up, I grabbed a grease pencil, and pure joy took over: Drawing on a white wall at night I understood why graffiti artists love their work. 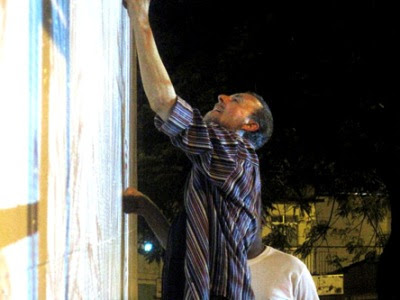 When rains came, helpers scrambled for plastic sheeting to shield our electronics, and my friend Augusto, the one who really saw this project through, became despondent.

“Don’t worry, Augusto, everything will be okay, you’ll see,” I consoled him – At which point, with a silent POP, the lights went out all down the block (temporarily). 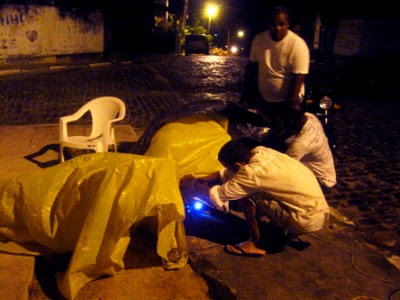 Rain falling while Augusto and a couple of helpers cover the projector © 2011, J Michael Walker

A young fisherman, scanning the northern sky, assured us rains would continue through the night, and people were poised to pack it in. But I was too enthused to call it quits, too sure of regret if I traipsed home and the full moon reappeared, smirking. I proposed a compromise: set up again and let me draw; if a single drop falls we leave. That drop never fell. 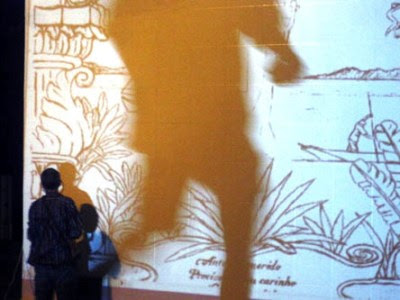 Over the following afternoons when I painted, the work flowed smoothly: the first afternoon I painted the dark blue outlines; the second afternoon I added light blue tones; on the third and fourth afternoons I added deeper blue tones; and on the fifth and final evening I inscribed thank-yous to the various supporters. 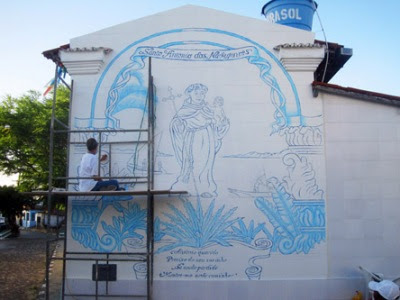 J Michael painting the mural in the afternoon © 2011, Augusto Albuquerque

As I painted each day, it was sweet to witness the gathering crowds: passers-by pausing between chores and home; neighborhood kids racing nearby, playing fútbol; street vendors; the young Lost Boys, hovering in semi-stupor, edging closer each evening, eagerly lending a hand to move the scaffolding; and the occasional stopped cyclists and motorists (Two guys in an all-terrain vehicle said, “We always have a beautiful view driving downhill [towards the ocean], but now we have a beautiful view driving uphill, too”). A couple of women brought me fresh-squeezed juice and cookies. And Carmelita, such a sweetheart, gifted me with a century-old statue of Santo Antonio that had been in her family for decades. 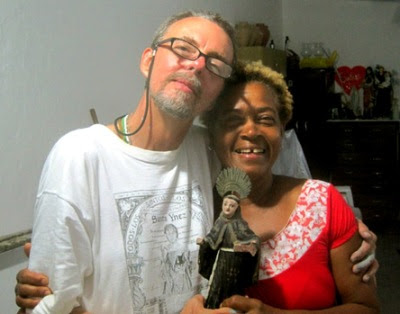 J Michael, Carmelita and the centenary statue of Santo Antônio he received as a gift © 2011, J Michael Walker

The morning after I completed the mural, the community held a celebratory breakfast, announced in proper Itaparican fashion with fireworks, and featuring a blessing of the mural, during which several of the women, teary-eyed, pointed to the place in their hearts where I was now forever lodged – a profound blessing for four afternoons’ work. J Michael and the community celebrate in the morning after he completed the mural © 2011, Alex Esquivel

Then the next evening – the night before we were to leave the island – the visitor’s bell rang at Sacatar, and twenty church members, resplendent in red blouses, rolled out of a rented van, surrounded me singing praise songs, lined up to give me hugs, and presented a hand-engraved granite plaque: 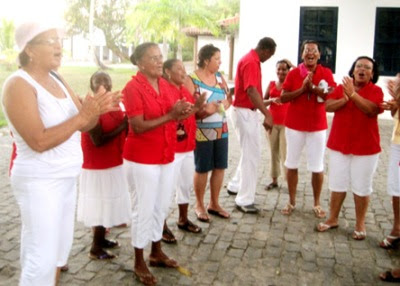 The visit of church members to J Micahel at Sacatar © 2011, J Michael Walker